Skip to Main Content
Service updates due to COVID-19
Home FEATURED ON BUNNYWORKSHOP U.S. ARMY TO PRESS AHEAD IN TESTING DRONES FOR BATTLEFIELD RESUPPLY

U.S. ARMY TO PRESS AHEAD IN TESTING DRONES FOR BATTLEFIELD RESUPPLY

Just imagine you’re in a Milsim game and you are running out of ammo especially that you are the defenders whilst the assaulting group is well prepared with enough BBs to lay a siege. Once you are low on ammo, you can call for a resupply in which your group can then send the ammo and whatever you need using drones. It is faster and cheaper, right?

That’s what the U.S. Army is looking into as they are testing autonomous drones at the company level and at the AEWE (Army Expeditionary Warrior Experiment) 2021, they completed an exercise in which they used commercial drones to supply ammo for the M249, M240, and the M4 rifles. In this exercise they were able to conduct 15 resupply missions for the defending group according to Military.com.

With the use of autonomous or semi-autonomous drones, the resupply missions get quicker and does not need to expose supply convoys to ambushes or subject expensive supply choppers to ground fire.  Drones are cheaper and quicker to deply and can come in tighter places where other aerial supply vehicles cannot.

The exercise impressed XVIII Airborne Corps Commander Lt. Gen. Michael "Erik" Kurilla that he signed a memorandum of endorsement of the concept for testing at the infantry brigade combat team, or IBCT, level. 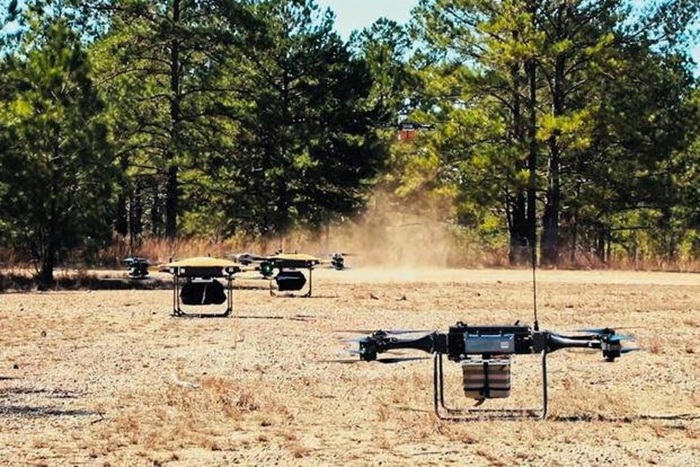 In the exercise, two types of drones were used: one drone with an 80lb. load and the other one, a 150lb. load. There were two suppliers of the drones, with the Malloy Aeronautics’ T-80 and T-150 drones that can travel to over 30 miles and the Bell Textron Autonomous Pod Transport (APT) that sits vertically and the APT 70 can carry a 70lb load up to 35 miles with a maximum speed of 120mph.

In the Military.com article, it took 20 hours for the soldiers to familiarize themselves with the drones and come up with supply packages that those at the frontlines can just order like in a menu. The troops can just radio in “package 2” and the supply troops know which package to load to a drone and whirl it up to fly to the location of the unit that called for it. The drones can go to the coordinates on their own and drop the supply, but the soldiers can also take control when there is a need to redirect when the situation on the ground changes.

It is a good exercise in large scale airsoft events to incorporate the use of drones in the game scenarios as supply drones.  With the future of warfare seen to be largely fought with the use of drones, airsofters may as well learn how to use them tactically and not just use them to capture on camera the airsoft action below.